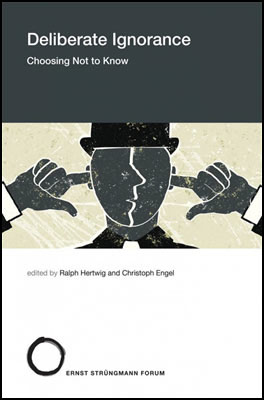 Choosing Not to Know

What do people want to know? This is one of the deepest and most fascinating questions in all of social science. Focusing on deliberate ignorance, Hertwig and Engel offer new and fundamental answers to that question. This book is a major step forward.

Is more information desirable? In classical economics, the answer is yes. This book provides compelling theory and examples from medicine, law, and politics to show that, in reality, people often prefer to be uninformed. The result is a fascinating read.

The history of intellectual thought abounds with claims that knowledge is valued and sought, yet individuals and groups often choose not to know. We call the conscious choice not to seek or use knowledge (or information) deliberate ignorance. When is this a virtue, when is it a vice, and what can be learned from formally modeling the underlying motives? On which normative grounds can it be judged? Which institutional interventions can promote or prevent it? In this book, psychologists, economists, historians, computer scientists, sociologists, philosophers, and legal scholars explore the scope of deliberate ignorance.

Drawing from multiple examples, including the right not to know in genetic testing, collective amnesia in transformational societies, blind orchestral auditions, and “don't ask don't tell” policies), the contributors offer novel insights and outline avenues for future research into this elusive yet fascinating aspect of human nature.

Deliberate Ignorance: Choosing Not to Know

Knowledge is valued; knowledge is sought. Western history of thought and literature abounds with examples. Yet our very ability to generate and disseminate knowledge also creates the possibility of choosing  not to know.

Consider, for instance, individuals at risk of Huntington disease: Nearly everyone with the defective gene who lives long enough will develop this devastating condition, yet only 3–25% of those at high risk opt to take a near-perfect test to identify whether they are carriers of the gene (Creighton et al. 2003; Yaniv and Sagi 2004). Is this intentional ignorance individually rational because no treatment is available? Do at-risk individuals fear that the knowledge of having the defective gene will ruin their healthy years? Would they be better advised to take the test because a negative result could liberate them from existential anxieties, whereas a positive result would allow them to make meaningful preparations for the illness during their healthy years?

Consider also individual and collective decisions to obtain or forgo knowledge about others’ past behaviors that were (from today’s perspective) morally offensive or even criminal. After Reunification, for example, the German government granted individuals access to files left by the communist East Germany’s secret police, the Stasi. Many of those entitled to view their records decided they did not want to know who had spied on them, whereas others declared that they did not read their files because they expected to find that they had been betrayed by people close to them. Meier (2010) has argued that many societies in transformation opt to “forget” (or deliberately not to find out about) and not prosecute past perpetrators (beyond the past regime’s top echelon), in an effort to break a vicious circle of revenge and retribution (see also Rieff 2016).

The law sometimes mandates deliberate ignorance, as in the way it regulates access to information about past criminal convictions is regulated. In German courts, a defendant’s criminal record is routinely read out at the beginning of court procedure. In the United States, however, such a reading conflicts with Rule 404 of the Federal Rules of Evidence, designed to ensure that a jury’ s view of a defendant is not prejudiciously biased. Similarly, to avoid age discrimination, it is common practice in some countries not to disclose one’s age when applying for a job, and for employers not to ask for this information. Further manifestations of deliberate ignorance, as well as references to experimental studies, are delineated by Hertwig and Engel (2016).

To date, however, science has focused primarily on the generation, acquisition, and dissemination of knowledge. Little attention has been paid to the wish not to know, the desire not to search for information and knowledge, and the preference for uncertainty over certainty, for ambiguity over clarity.

This Forum will examine the epistemic choice of deliberate ignorance; identify and model the motivational, cognitive, and affective processes that underlie deliberate ignorance; and discuss the normative implications and institutional responses. It offers a unique opportunity for a joint examination of the underpinnings, rationality, and ethics of deliberate ignorance, as well as its sociocultural and institutional implications. Four topics—predictive genetic testing; truth and reconciliation in society; selection processes to counteract stereotypes/bias; and negotiations—will be prepared as starting points for examination by the working groups.

Goals for the Forum

The objective of this working group will be to define the boundaries of the concept. Although a few classificatory attempts have been made (e.g., Hertwig & Engel, 2016; Golman, Hagmann, & Loewenstein, 2015; Wehling, 2015), they have emerged side by side with no theoretical integration and with obvious blind spots. Deliberate ignorance is not (yet) an established concept. Which phenomena should be subsumed under this umbrella term? Must an individual have definite knowledge that she lacks relevant information, or does it suffice that the individual suspects the existence of more information? Must the individual make an active choice, or does it suffice that she pays no attention, forgets what she used to know, or simply suppresses the memories of a haunting event? Is the individual the appropriate object of study in the first place, or should the focus be on the institutional arrangements that facilitate the concealment of facts? Do different research questions invite differently defined boundaries for the concept of deliberate ignorance? For instance, a psychologist interested in deliberate ignorance as a strategy for the regulation of emotions may want to draw the line in a different place than a lawyer who wants to advise the legislator when to exclude liability for stopping search.  In various domains, the law obliges individuals or firms to inform themselves or even to seek new knowledge, as illustrated by medical malpractice. May a doctor counsel against conducting an established medical test (e.g., PSA test) or refrain from exploring a new diagnostic tool, although its utility is not yet fully established? Concerned with the risk of defensive medicine, the legislator may shield doctors from liability on either account by defining medical malpractice more narrowly and by permitting the doctor’s choice not to seek information.

This group will examine different ways of modeling deliberate ignorance. Classic economic theorizing assumes that individuals derive utility not from information per se but from its potential material consequences. Thus this view holds that information carries value to the extent that it results in better decisions. A straightforward implication is that costless and valid information should never be actively avoided, unless ignorance of it confers a strategic advantage. This view, however, neglects that people often cannot simply act as if they had not received this information. To go beyond standard economic theorizing, the standard economic utility function has been extended and it has been proposed that information has direct hedonic value, which is divorced from its usefulness. Other approaches have emphasized the importance of anticipated emotions (e.g., such as regret) in understanding deliberate ignorance. Another approach may focus on people’s potentially inaccurate predictions about future hedonic states. The group will discuss these and other approaches to modeling deliberate ignorance and understand how they relate to each other, how they can inform each other, and their respective strengths and boundaries. Additionally, it will work to identify mathematical formalism that can both accurately represent hypotheses and allow easy elaboration.

This group will address the promise and perils of deliberate ignorance: When can ignoring available information be legitimate? The most radical position is that whatever the anticipated consequences, and whatever the cost, available information should always be used. When would deontologists make an exception? How would utilitarians decide? When does concealing information improve welfare or break through vicious cycles of revenge and retribution? What does deliberate ignorance contribute to behavioral welfare theory? Can risk pooling be justified if the winners and losers of treating everybody the same are potentially identifiable (the insurance industry is increasingly facing this issue)? Does a mother have the moral obligation to find out whether her husband is abusing their child, even if the outcome of that investigation might cause the family to break apart? Can society force a diagnostic procedure or genetic information on someone who would rather not know whether she is ill or has a specific genetic risk factor, even if it is life threatening? The group will develop an analytical framework—and, perhaps, a decision tree—on which basis specific instances of deliberate ignorance can be evaluated with regard to their ethical desirability, legitimacy or welfare effects.

This group will examine the institutional consequences of deliberate ignorance, both desirable as well as undesirable. Deliberate ignorance does not have value per se. Arguably, there are instances where not acquiring or using information, or not generating or disseminating knowledge are individually legitimate, possibly even socially desirable. If so, institutional design is called for. What can be done to protect the legitimate interest or right not to know? The traditional response to such normative challenges is regulation. Which are the options for protecting legitimate deliberate ignorance with formal institutions? Can law and regulations enable individuals and groups to protect themselves? Can technologies empower the choice not to know, or conceal detrimental information in the first place? Can education teach smart deliberate ignorance? Should children be taught how to navigate an informationally fattening environment? And how does either institution balance the right of some not to know with the desire of others to learn this very information?

Yaniv, I. and Sagi, M. 2004. On not wanting to know and not wanting to inform others: Choices regarding predictive genetic testing. Risk, Decision and Policy 9:317–336.