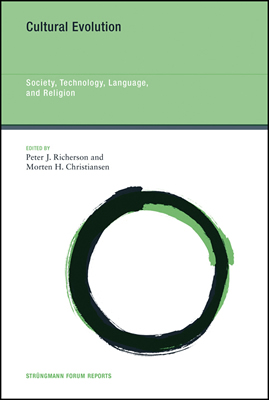 This ambitious and wide-ranging collection provides challenging theoretical discussions of the mechanisms of cultural evolution, including its complex relationship with biological evolution. It includes some comprehensive and reliable surveys of the current state of knowledge in four relevant domains—social structure, technology, language, and religion—that do not shirk from identifying unsolved problems. It is thus a promising basis on which the ongoing study of cultural evolution can proceed.

Cultural evolutionary studies explore selection, change, transmission, and inheritance in a variety of settings, including social systems, technology, language, and religion. Do such studies offer an integrated perspective capable of making sense of such superficially diverse phenomena? What kinds of models are required, and how can we distinguish the good ones from the bad? This volume provides a perfect window onto these important debates. A must-read for anyone interested in the scientific study of human behavior.

FRSE Professor of Logic and Metaphysics, University of Edinburgh

Over the past few decades, a growing body of research has emerged from a variety of disciplines to highlight the importance of cultural evolution in understanding human behavior. Wider application of these insights, however, has been hampered by traditional disciplinary boundaries. To remedy this, in this volume leading researchers from theoretical biology, developmental and cognitive psychology, linguistics, anthropology, sociology, religious studies, history, and economics come together to explore the central role of cultural evolution in different aspects of human endeavor. The contributors take as their guiding principle the idea that cultural evolution can provide an important integrating function across the various disciplines of the human sciences, as organic evolution does for biology. The benefits of adopting a cultural evolutionary perspective are demonstrated by contributions on social systems, technology, language, and religion. Topics covered include enforcement of norms in human groups, the neuroscience of technology, language diversity, and prosociality and religion. The contributors evaluate current research on cultural evolution and consider its broader theoretical and practical implications, synthesizing past and ongoing work and sketching a roadmap for future cross-disciplinary efforts.

To explore the role of cultural evolution in explaining human social structure, technology, language and religion

What can we explain by means of cultural evolution that does not follow from other perspectives, such as memetics and innatist theories?

Can we sketch roughly how general models of cultural evolution will come to differ as they are specialized to fit various domains?

Is there a detectable signature of cultural evolution that can be observed across all domains?

How can researchers and scholars in different areas of enquiry benefit from adopting cultural evolutionary tools?

How can variations in the rates of cultural evolution across the broad sweep of human history and prehistory be explained?

Are different domains amenable to different degrees of cultural engineering?

A considerable amount of work has been done on the importance of cultural evolution across a variety of disciplines with a stake in understanding human behavior. Culture in its many manifestations—social organization, technology, science, language, religion—is responsible for the striking difference between humans and other organisms, and for our ecological dominance of the Earth. A rigorous science of cultural evolution began to develop in earnest in the 1970s and has now been energized by a second generation of active and creative scholars. Moreover, the field has been propelled forward by recent methodological innovations (e.g., Bayesian phylogenetics, Dollo methods) that have been applied broadly across fields, from palaeolithic jewelry to Turkic carpets to whole language families.

As a synthetic field, research on cultural evolution touches all areas of the human sciences, not least human biology, as well as many areas within the humanities. It also has considerable relevance to animal behavior, since many animals turn out to have systems of social learning. More controversially, many themes studied by cultural evolutionists may have application to organic inheritance if the idea of epigenetic inheritance is found to have important elements of intergenerational inheritance.

As rapidly as the field of cultural evolution has grown, most social and biological scientists as well as most researchers in humanities still have limited understanding of the insights that this newly invigorated field can deliver. In many cases, the key contributions made in the past and the promises of the new tools have not been sufficiently appreciated, thus inhibiting their application to research in any number of areas. Part of the reason for this can be found in the way various disciplines conduct their work (e.g., in relative isolation and with little interaction between established fields). Thus, establishing the necessary connections across research areas, and reinforcing those already in existence, is imperative—not only for the field of cultural evolution as a whole, but also for the subfields found across the humanities and the social and biological sciences as well.

Many overarching questions depend upon a better understanding of cultural evolutionary processes. Take, for example, the importance of culture and culture-like systems in humans compared to non-human animals: Why did humans come to have a hypertrophied system for imitation and teaching? Why did human culture develop slowly at first and increase rapidly in the recent past and especially in the present? Do mismatches in rates of cultural evolution (rapid technological change, slow social change) currently pose risks for humans? Past human societies have undergone spectacular booms and busts. Are the causes of such phenomena at work in societies today? Much policy making can be construed as attempts to deliberately engineer cultural change, but why do some policy initiatives produce the changes envisioned by their makers (mass public education) while others fail (wars on drugs)?

There are many aspects of human endeavor where our understanding can be improved by adopting a cultural evolutionary perspective, including the topics upon which the Forum will concentrate: social systems, technology, language and religion. It has become increasingly clear that human biology was remodeled as humans adapted to the cultural evolution of agricultural subsistence systems a few thousand years ago. Yet, so far the potential of the field has hardly been tapped. For example, much of the most sophisticated modeling of culture has been rather generic. The models specify the abstract structure of the inheritance system (vertical, oblique or horizontal transmission) and a set of forces that drive cultural change (innovation, biased transmission, natural selection on cultural variation, random drift) and are often applied to narrow cases (dairying and adult lactase secretion, the demographic transition). This Forum will consider whether intermediate levels of generality hold promise. Do models of the evolution of social organization, technology, language, and religion have interesting similarities across each domain? Can we hope for empirical generalizations at this level of abstraction? Of course these four domains are not at all isolated from one another in real life, but the field would benefit from a more systematically organized theoretical and empirical effort, not least because the traditional disciplines are so organized.

At the same time commonalities across the traditional disciples are also important and interesting to the extent that they exist. Gene-culture coevolution theory has great promise as a vehicle for communication among the social sciences and between the social sciences, the humanities, and the natural sciences. The common problem is change over time in systems where the past influences the present. As Darwin noted, the phrase “descent with modification” fits the evolution of societies, technologies and languages as well as biological organisms. But how do we know that something is the product of an evolutionary process? Should we expect to observe tree-like phylogenetic relationships across both cultural and biological domains or will culture produce more heavily reticulated phylogenies? Evolutionists in the broadest sense thus have to confront problems of the complexity and diversity of the systems they study and of historical contingency.

This Forum will provide a unique opportunity to promote cross-disciplinary understanding of cultural evolution by taking stock of current research and past successes as well as the various tools available, both old and new. The unique Forum format will serve this purpose well, and position science and the humanities to better meet future challenges in light of cultural evolution.

Group 1: The Cultural Evolution of the Structure of Human Groups

Group 2: The Cultural Evolution of Technology and Science

Group 3: The Cultural Evolution of Language

Group 4: The Cultural Evolution of Religion